Tips for Living with a Dog Who Chews

Most dogs give up their excessive chewing after about six months old, but I commonly expect some degree of chewing until they are around two or three years old. I have lived with dogs all my life, and my house shows it. A gnawed table leg here, a chewed chair leg there, and so on. I have never had a dog that didn’t fall in love with something I had to ultimately replace. 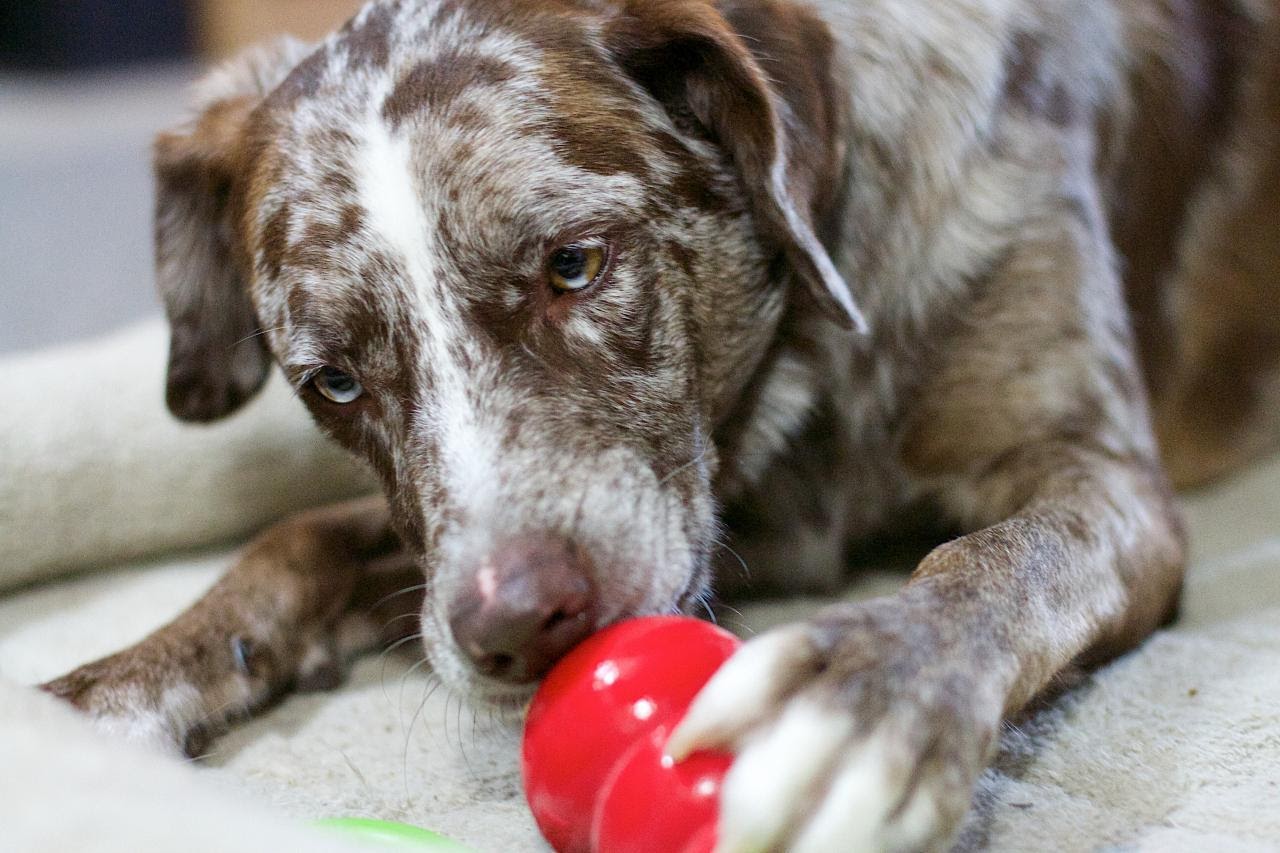 Puppies often chew to relieve pain caused by their growing teeth. But sometimes it goes on, possibly as a way to relieve stress. But chewing is also good for their teeth. It helps keep them strong and fight plaque, so it’s not something you want to completely remove from your dog’s habits. If they are chewing something you do not wish to have chewed, then make a loud, sudden sound. Followed immediately by giving them an appropriate chew toy. This may take several weeks, but if you are consistent, your dog will eventually follow suit and seek out the dog toy first. It’s important to introduce this toy immediately so you don’t shame the dog from chewing entirely.

While chewing on wooden furniture and dog toys is natural, sometimes you might catch your dog chewing on carpet as well. The dirt and chemicals that may be in the carpet are not healthy for your dog, and they can be a pain to repair without notice. My youngest pup, Mollie, loves one particular spot of our carpet. Anytime we’d catch her, we’d apply the trick mentioned above - a loud sound, and a replacement toy. But soon I noticed that she was vomiting - sometimes food, and sometimes bile. The vet informed us Mollie probably had a gastrointestinal issue in which chewing on carpet is a common sign. A simple treatment of pills has taken the issue away, but I do wish I had known sooner. I could have saved my carpet and money on shampoo for the Spotbot.

Sometimes your dog is chewing on furniture because the toys they own are not satisfying their cravings. My Schnauzer is little, so she prefers softer and floppier toys. She likes to whip them around like the tough little girl she thinks she is. Any stuffed animal will do, especially if it has a squeaker. It is probably what she imagines catching a squirrel in the wild would feel like. But my older Schnauzer, who is larger, is more interested in larger plush toys. He is past his chewing days usually, but seems to be more comfortable carrying his own bone-shaped pillow.

Compare my Schnauzers to my mother’s Boxers. The three Boxers are all older than five, and are still aggressive chewers. We spent a lot of time and money going through toys for them. Most were destroyed in a day. (I spent time researching the best ones for her aggressive chewers.) The moment they do not have their toys, they’ll revert back to chewing on a chair leg or sofa arm. I’ve caught them damaging things beyond repair in less than five minutes.

In conclusion, it’s important to steer your dog away from chewing on inappropriate things by directing them to appropriate things. The overall chewing will eventually fade as they get older, but in the meantime, keep your home stocked with appropriate toys for their size and habit. Keep in mind that chewing is a good thing for their stress level and teeth. It’s all in a day’s work for your best friend!